Relative radiometric normalization (RRN) approaches aim to adjust the radiometry of the images included in a temporal sequence (subject images) to that of a reference image. Temporal invariant objects presented in the multi-temporal set of images should have the same spectral signatures after the normalization.

The concept of RRN is not new and many algorithms have been proposed. These algorithms can be clustered into two basic categories: the manual and the automatic algorithms. Manual algorithms require user’s involvement during the process, making the RRN time consuming and subjective. On the contrary automatic RRN algorithms minimize or even exclude user’s involvement. In both categories two common steps are identified: (a) the selection of Invariant Pixels (IPs) or Pseudo-invariant Features (PIFs) and (b) the regression function calculation. The way that IPs are selected, i.e. manually or automatically, characterizes the category of the algorithm.

A relative radiometric normalization algorithm can be based on the normalized difference vegetation index (NVDI) is developed. This algorithm is a variation of the PIFs, it is called temporally invariant cluster (TIC). In order to select the IPs or the TIC, a scatter plot is formed with x and y axis containing the values of the NVDI of the subject (x) and reference (y) image. From this scatter plot a density map is calculated. According to their assumptions, the TIC should be distinct areas of the scatter plot. The centres of the TICs are selected as invariant pixels and are used to calculate the regression lines. Lack of automation is mainly due to the final selection of TICs. It is based upon observation of the point density map in conjunction with visual examination of the original images to confirm that those pixels are truly spectrally invariant.

The need for automation and objectivity in the RRN process forced the development of automatic RRN algorithms. This family of algorithms focuses on the automatic selection of IPs. For example the Multivariate Alteration Detection (MAD) transformation on multispectral images. MAD focuses on the selection of IPs using statistical measures (covariance and correlation) that are computed from the difference image which results from the reference minus the subject image. The IPs are selected automatically by the application of a threshold on an computed index. This index is calculated from the statistical measures. An enhanced version of MAD, the Iterative Re-weighted MAD (IR-MAD) transformation is presented by Canty and Nielsen, (2008). It establishes a better background of no change (invariance) upon which to examine significant changes. The IR-MAD procedure is superior to the conventional MAD transformation in identifying significant change, particularly for data sets in which the fraction of invariant pixels is relatively small.

Another automatic RRN algorithm is based on linear regressions derived from the reflectance of automatically selected IPs. The difference image is initially computed and masks are applied in this image (cloud, saturation, agricultural lands, sea surface). The pixels with values near null in the difference image are selected as IPs. The algorithm was tested against an atmospheric correction technique. The purpose was to investigate whether the RRN can be used as a substitute of atmospheric corrections.

Another automatic RRN algorithm mainly focuses on the automatic selection of IPs based on two spectral classifier algorithms: the Spectral Angle Mapper (SAM) and the Spectral Correlation Mapper (SCM). This procedure calculates for each pixel the SAM or SCM value between the spectra at the two images (subject and reference). Considering a low threshold value is possible to define pixels with the same spectral behaviour and without variation. The algorithm then considers a two-step linear regression technique to increase the accuracy of the normalization. In the first step the linear regression is calculated and outliers are determined. In the second step these outliers are excluded from the regression and only the best pixels for radiometric adjustment are considered.

An automatic relative radiometric normalization algorithm based on the Principal Component Analysis (PCA) is proposed. PCA in a multi-temporal mode is applied to the same bands on two different dates and is used to find linear relationships between multi-temporal images of the same area. The slope (SL) of the major axis should be unity and the scatter plot pattern for any image pairs should be a straight line, if the two images are exactly the same without any land cover change and without linear effects. Initially, pixels of great alteration (clouds and sea) are masked out. The remaining pixels are used to calculate the PCA and the corresponding SL. Pixels that lay on the SL with a certain variance are considered as IPs. The variance is determined from the minor axis of the PCA. After that, a quality control step is used. The linear correlation coefficient (r) of the selected PIFs is calculated. If r is less than 0.9, more pixels are masked and new PIFs are selected until r becomes greater than 0.9.

Get 1 Year Access Now
Initially the reference and subject images are automatically masked for clouds and invalid pixels and then a corregistrated image is produced. Each pixel vector in this image contains two values per band, that of the reference and that of the subject image. For each pixel and band of the corregistrated image, the difference between the two values is computed. Then, based on the corregistration image the AND and ANRD images are calculated. 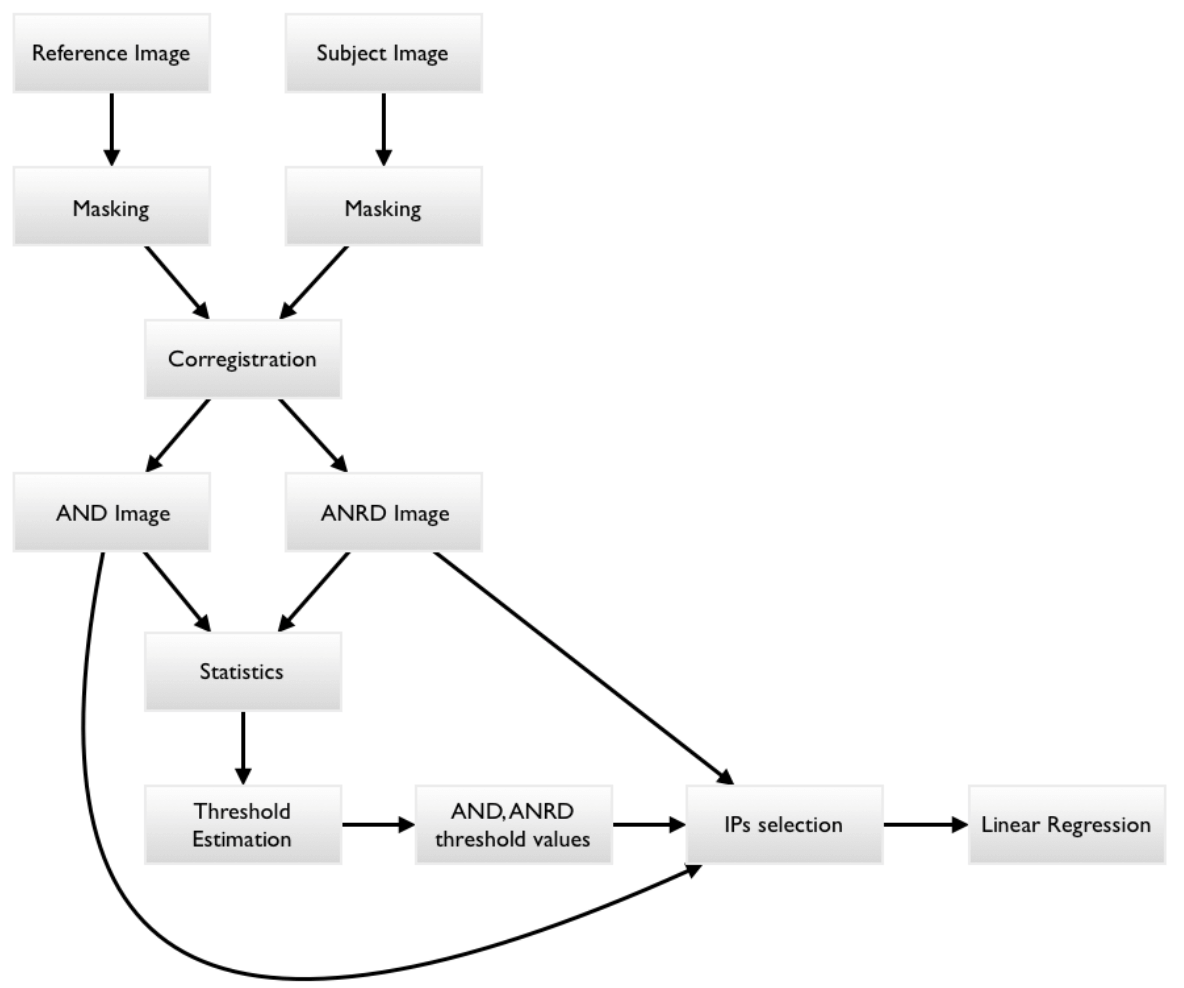 Normalized Proximity and Similarity Methodology (NPSM) focuses on the way that pixels are selected as invariant. The methodology uses two indexes to decide whether a pixel in the two images should be considered as radiometrically invariant or not:

In (1) and (2), ref and sub are the pixel values in the reference and subject images respectively, i is the ith pixel,  j is the jth band, and k is a randomly selected band which is kept constant throughout the process.

I'm a Remote Sensing and a Surveying Engineer. I received my degree from NTUA in 2010, where I also received my Ph.D. in hyperspectral remote sensing in 2016. From graduation in 2010, my career started as a Researcher Associate and Teaching Associate in the Laboratory of Remote Sensing of NTUA. From that time I also worked at several private companies as a Remote Sensing Expert and Geospatial Analyst. From the beginning of 2015 I was positioned as Senior Earth Observation Expert. During these years, I have participated in more than 20 funded European Commission and European Space Agency projects, have over 16 peer reviewed scientific publications in the field of Remote Sensing, and have an international patent in hyperspectral data compression.My main research and professional interests are in the optical remote sensing area, where I specialize in data (images, point measurements) processing and algorithm design and development. Some of the software tools that I operate to accomplish my research and business dreams are SNAP, ENVI, IDL, QGIS, ERDAS Imagine, ArcGIS, and Python. I have been working with these tools since 2008. 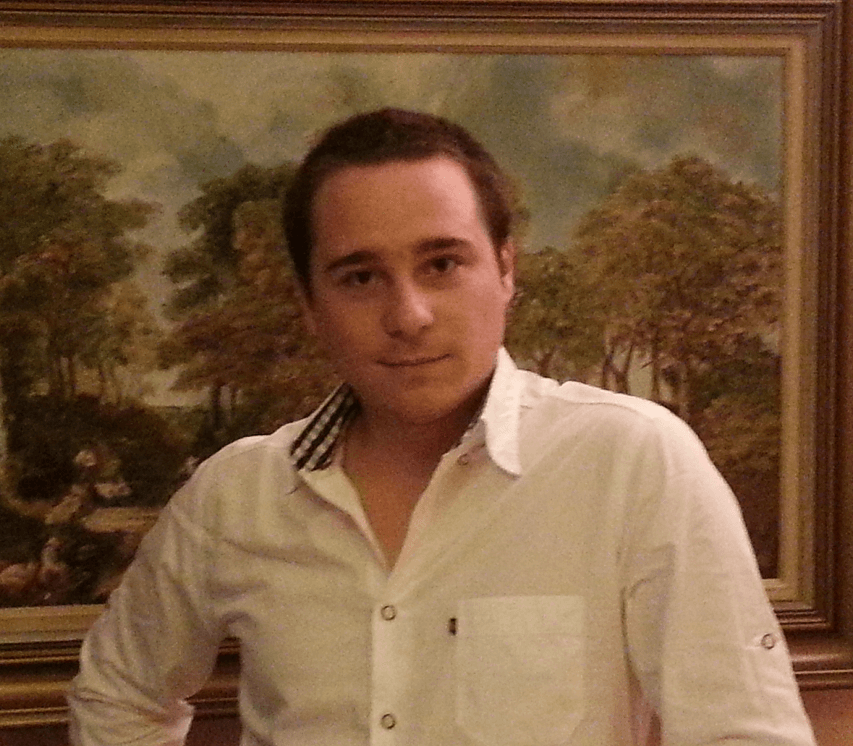